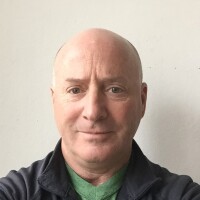 Joseph Ostraff, a native of Southern California, has been a resident of Utah since 1986. After graduating from Laguna Beach High School in California, Joseph attended Brigham Young University, receiving a Bachelor of Fine Arts Degree in painting. After his BYU experience Joseph married Melinda Weston and moved to Seattle, where he attended graduate school at the University of Washington, receiving a Master of Fine Arts Degree in painting. Since then he has done everything from lumberjacking in Idaho, sweeping floors in a department store, selling his paintings on the streets of Seattle for gas money, and building a house on the Kitsap Peninsula- to traveling the South Pacific on funds collected from art commissions, exhibiting nationally and internationally, and most recently making a documentary film on the traditional art of Tapa cloth-making in Tonga. Joseph has also taught in the public school system for seven years and is currently an assistant professor of art at Brigham Young University.